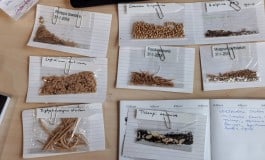 Students interested to join my research team are welcome. Have a look at the student projects below or contact me by mail to discuss your topic of interest.

Lettuce downy mildew is one of the most serious diseases of lettuce (Lactuca sativa). It is caused by the oomycete Bremia lactucae, a pathogen notorious for its capability to rapidly overcome host resistance.
As a result most lettuce cultivars lack nowadays adequate resistance to new Bremia races. Natural populations of related Lactuca species are regarded as important sources of novel genetic resistance.

This project aims to evaluated Bremia resistance in wild Lactuca populations from Central Asia, which are currently underrepresented in gene bank centres, by combining phenotypic and genotypic analyses.

Similarities between plant immunity and self-incompatibility

Self-incompatibility (SI) is a genetic mechanism in plants to prevent inbreeding and to promote outcrossing.
In the mustard family (Brassicaceae), SI is determined by two recognition determinants;
the pistil receptor-like kinase SRK and the pollen ligand SCR. Self-pollen recognition via SRK induces a response that resembles an immune reaction. Brassicaceae contain besides SRK, multiple homologous RLKs of unknown function. Many of these are expressed during diverse plant-biotic interactions, suggesting key roles in plant defense. Here, we hypothesise that SRK evolved from a defense gene, and underwent neofunctionalization.

Black rot, caused by the bacterium Xanthomonas campestris campestris (Xcc), is one of the most destructive diseases of cabbage. Currently grown cultivars do not provide adequate resistance, and no resistance genes have been cloned so far. This project aims to unravel novel defense mechanisms during early bacterial attack.

Plant receptor genes (RLK/Ps) underwent a dramatic expansion in comparison to many other gene families, indicating their importance for plant immunity to diverse pathogens. Gene duplication via polyploidy and small-scale local duplication events is a major evolutionary force driving gene expansion and variability. This project aims to identify the genetic diversity among RLK/Ps in plants via comparative evolutionary genomics.

Lamb’s lettuce (Valerianella locusta; veldsla) is a leafy vegetable that is often used in mixed salads.
It belongs to the family Caprifoliaceae and is thus not, as suggested by its name, related to lettuce
(Lactuca sativa, Asteraceae). Cultivars of Lamb’s lettuce are supposed to have narrow genetic diversity, largely because breeding programs have much relied on identical germplasm collections.

This narrow genetic diversity limits the potential to cope with environmental changes, including bacterial blight - an emerging disease caused by the bacterium Acidovorax valerianellae. Safeguarding germplasm of natural populations of Lamb’s lettuce and closely related wild relatives will benefit breeding of more future-proof cultivars. This project aims to explore genetic and ecotypic variability in Valerianella, both in cultivars and wild relatives.